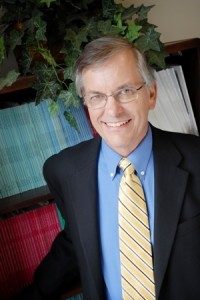 John Lochman has been recognized by Purdue University with a Distinguished Alumni Award. This award honors alumni who have significantly advanced their careers and have demonstrated noteworthy professional accomplishments that reflect favorably on their profession, Purdue, and society.

The following description of Dr. Lochman was written by Matt Schnepf.

Through intervention and prevention, alumnus John Lochman has built a rich legacy of addressing childhood aggression.

Upon enrolling at Purdue University in 1967, John Lochman (PSY ’71) planned to study engineering. That trajectory soon changed, however, when he took his first step toward becoming an academic clinical psychologist who has improved children’s lives.

“Purdue University made me interested in psychology,” says Lochman, now the Saxon Professor Emeritus of Psychology at the University of Alabama. “During my freshman year, I took an introductory psychology course and found it quite fascinating.” That class piqued Lochman’s interest in behavioral science and clinical psychology, and he eventually changed majors. After graduating from Purdue, he continued his studies at the University of Connecticut.

In the ensuing years, Lochman has made an enduring impact, co-developing programs to help children at risk for classroom behavior problems. “Dr. Lochman has changed the field, thoughtfully translating basic theory into systematic interventions backed by solid research and evaluation,” says David Rollock, a 150th Anniversary Professor and a professor of psychological sciences at Purdue. “Much of what we teach our clinical science graduate students for intervening with children and behavioral training for their parents reflects the approaches he studied, implemented and disseminated.”

When Lochman was still in college, psychology moved further from psychoanalysis and more toward research- and evidence-based treatments. Community psychology, applicable to the real world, also gained a following as Lochman began working with elementary-age children.

Through intervention and prevention techniques, he used behavior therapy to help teachers address student conduct. Although this required working directly with children, his studies also included parents in order to explore family dynamics. “Children learn methods for how to regulate emotions and solve social problems from observing their parents during the early years,” Lochman says. “For some families where there’s intense marital conflict, good modeling doesn’t occur.”

Lochman’s programs have become evidence-based models for intervention and prevention. Anger Coping, created in the late 1970s, helps children adopt emotion-regulation skills by recognizing arousal triggers and how to regulate one’s response. “The hope was that if children could manage the arousal, then they could think through what to do in competent ways,” Lochman says. Later, while on faculty at Duke University, he co-adapted Anger Coping into Coping Power, a program that has been tailored internationally, from Italy to Pakistan.

Programs co-developed by John Lochman have helped improve the lives of at-risk children.

“We built Coping Power to work right at the end of elementary school to transition students to the middle school years,” Lochman says. In addition to emotion regulation and goal setting, Coping Power addresses peer involvement, helping children develop socially while recognizing their classmates’ influence. “If you get involved with peers engaged in deviant behavior, your likelihood of becoming that way increases, so we focus on trying to prevent that from occurring.”

Beyond these programs, Lochman has influenced his own students. Marion Underwood, dean of Purdue’s College of Health and Human Sciences and a distinguished professor of psychological sciences, studied with him at Duke. “John Lochman has been an inspiring mentor for me since I was 21 years old, always modeling the highest intellectual standards, kindness and compassion toward children who struggle with anger regulation and doing research that makes the world better,” she says.

Lochman also connects faculty via interdisciplinary pursuits. Upon joining the University of Alabama, he became founding director of what now is called the Center for Youth Development and Intervention. “The university, at that time and obviously still today, was pretty siloed,” he says. In response, the center connects faculty across disciplines through professional collaboration, from anthropology, human development and biology to psychology and social work.

Now retired, Lochman still works with graduate students and conducts research. “I’m still part of five ongoing research grants,” he says. “Some days being retired doesn’t feel much different than working.” He also serves as interim director of the Alabama Life Research Institute, and as an adjunct professor at Duke University Medical Center.

Lochman takes pride in his work on behalf of 1,000 or so children and families. “It’s had an effect on the field — on what people do, how they adapt or make their own interventions, based on some of the same principles,” he says.